Lessons from the Economic Crisis in Venezuela

Several years ago I started collecting coins. I love the beauty of a nicely preserved coin; just looking at the year on the coin takes me back to that time and place in history.

In addition to the usual proof sets most numismatists collect, I also like to collect coins that reflect unique times in history such as US steel war pennies and Japanese occupation dollars.

A few years ago I started collecting hyperinflation currency – currency issued by a country during a time of hyperinflation. Hyperinflation is extremely rapid or out of control inflation – a situation where the price increases are so out of control that the concept of inflation is essentially meaningless. Hyperinflation often occurs when there is a large increase in the money supply not supported by gross domestic product growth, resulting in an imbalance in the supply and demand for the money. This causes prices to increase, as the currency loses its value. Soon even the largest denominations of the country’s currency has so little buying power that consumers need to bring a wheelbarrow of currency just to buy a loaf a bread. To respond to this, the government begins to issue larger and larger denomination bills. Finally the denominations reach such ludicrous levels and have so little value that the currency totally collapses. One of the most famous examples of hyperinflation occurred in Germany between January 1922 and November 1923. By some estimates, the average price level increased by a factor of 20 billion, doubling every 28 hours.

One of my favorite pieces of hyperinflation currency in my collection is my 100 Trillion Dollar bill from Zimbabwe when by 2008 their inflation rate had reached 231,150,888.87%. Use of the Zimbabwean dollar as an official currency was effectively abandoned on April 12, 2009.

Venezuela is currently experiencing hyperinflation. According to estimates released by the International Monetary Fund, inflation in Venezuela is projected to increase 481% this year and by 1,642% next year. To put that in perspective, in February of 2016 a 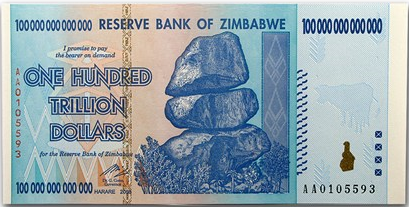 McDonald’s Happy Meal in Caracas cost $146 dollars at the official exchange rate of 6.3 bolivars per dollar

So how does a country with more oil reserves than Saudi Arabia end up with armed guards on food delivery trucks, 3 mile long lines to buy basic food, people dying due to lack of basic medical supplies and more poverty than Brazil?

As part of his Bolivarian Socialist Revolution, Chavez implemented price controls on goods. The government set prices at which retailers can sell goods.  If you violate a price control and sell your goods for a higher price, the government will jail the business owner and nationalize (seize) their business. As a result of these price controls, it cost farmers more to grow the product than they could sell it and it cost factories more to produce an item then they were allowed to sell it. The logical conclusion to this scenario occurred – the farmers stopped growing crops and the manufacturing facilities stopped producing goods. The government’s response – jail the business owners and seize their factories and farms. The Venezuelan government was totally unqualified to run these factories and farms; as a result, they have all been shuttered.  This lead to a huge imbalance in trade and Venezuela started to import almost everything from basic foods to medical supplies. This works great as long as the government has the huge revenue income required to support those types of subsidies.

For years, the country has been deeply dependent on its vast oil reserves, which account for 96 percent of export earnings and nearly half its federal budget. That was manageable when oil was selling at more than $100 dollars a barrel. Venezuela now needs oil prices to reach $121 per barrel to balance its budget however oil is hovering around $50 per barrel.  Add to that the fact that oil from Venezuela is very thick and difficult to refine making it not as desirable as light sweet such as Brent Crude. This has forced Venezuela to import oil to blend with their oil to make it saleable in the current market.

Since 2005, Venezuela has borrowed $50 billion from China as part of an oil-for-loans agreement. Venezuela exports more than 600,000 barrels a day to China, however nearly 50 percent of that goes to paying off its existing debt to China. The situation has gotten so bad that Venezuela is selling its gold reserves to pay foreign debt obligations.

Venezuela’s bolivar recently fell past 1,000 per U.S. dollar in the black market. That means that the country’s largest denomination note of 100 bolivars is now worth less than 10 U.S. cents. The currency has lost 81 percent of its value in the last 12 months. This makes a bad situation much worse for a country that imports almost every basic need. For comparison purposes to truly understand how bad hyperinflation is getting in Venezuela, a  doctor working in the country’s national health care system makes $15 per month. As of this writing, a 1kg bag of apples in Caracas costs $18. A liter of whole milk was $5.14. A 40” flat screen TV was $5,889. (U.S. dollars, assuming an exchange rate of 0.15748 USD per Venezuelan Bolívar. Source is a crowd-sourced cost-of-living comparison site).

Sadly for the good people of Venezuela, it is almost inevitable that their currency, the Bolivar, is destined for my hyperinflation currency collection. But what is the lesson that we as Supply Chain professionals can take from this tragic situation? Perhaps that supply chains and markets must be free to find their own price and value; and that governments cannot run a government properly, much less a factory.

Have a Question? Get in touch. Profit Point is here to answer any questions you may have, help you with information, and create an effective solution for all of your supply chain needs.
END_OF_DOCUMENT_TOKEN_TO_BE_REPLACED