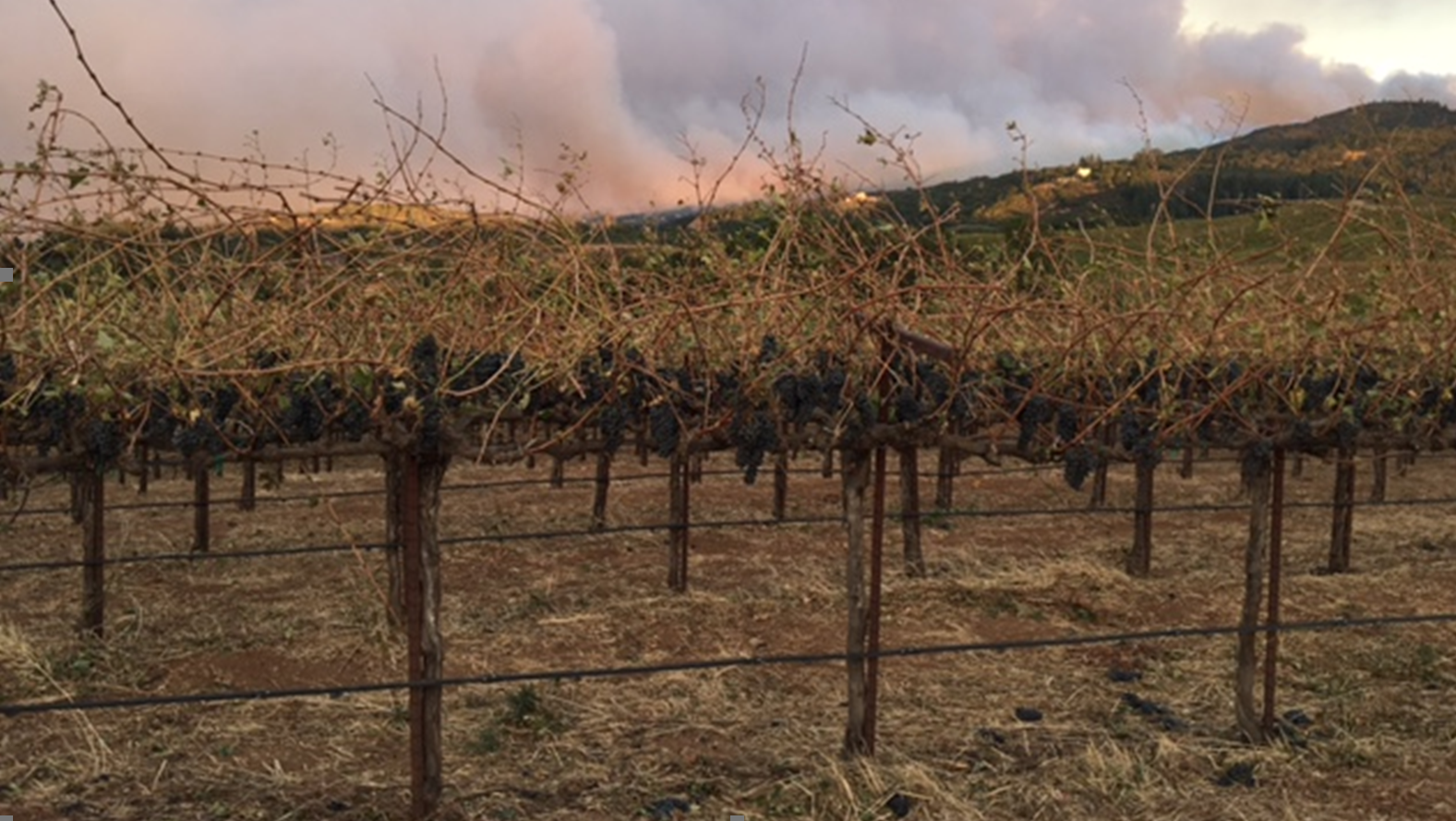 I’ve had the pleasure to live and work in the Napa Valley since 2010 in various Supply Chain roles. On an unseasonably warm Sunday night, I went to bed and woke up to complete darkness at around 5:30 am. As I pieced together what was happening, I came to realize that extremely high winds had started fires and the power was out. I have two cell phones, however with 70 cell towers damaged service was spotty, but I was able to use my personal hotspots to gather information. There were fires raging on three sides of me. The closest one, the Atlas Peak fire came within 2.5 miles of my home burning the homes around the Silverado Golf Course which I played as recently as August and just hosted the Safeway Open. After contacting friends that live in Silverado and finding out that they were evacuated but safe, I began to scramble myself. Uncertain of where the fires were going and if they would be contained before I was personally affected, I gathered my critical documents, packed a bag and started monitoring the news. My power came back Monday morning; I later learned that probably it was because I am on the same grid as Queen of the Valley Hospital, so we get priority. Some of my Napa friends were without power for days.

It was smokey all over the Bay Area, but about six friends invited me to stay with them if things got too bad for me to stay in Napa. After 48hrs of sheltering in place, I decided to leave when the winds shifted back towards my home, and there was very little containment. I was sad about some of the possessions that I had to leave behind, like my 1992 VW Cabriolet, but my heart was broken about what was happening to the homes, vineyards, and livelihoods of so many people of Napa and Sonoma County. These were the final days of the 2017 Harvest, the culmination of years of work and investment and the height of tourist season. The news reports said that 90% of the grapes had been harvested already, so that was some relief, but I suspected that not all vineyards were that high in their harvest percentages and the Cabernet grapes, which Napa and Sonoma are known for, is one of the last grapes to be harvested. I was one of the lucky ones, I was only displaced for four days, and my home was not damaged. I’ve been meeting new neighbors and folks in line at the post office that were not so fortunate.

Fast forward to December; I’m invited by a Wine Ambassador friend for the Boissett Collection to a holiday tasting at Raymond Vineyards. I am more than happy to go to help support wineries get back on their feet and also to find out directly how they were affected. The Boissett Collection of wineries were one of the lucky ones. They had harvested most of their grapes, but at the event, I met a vineyard manager from Sonoma who wasn’t so lucky. 60% of her property burned which included 1% of the vines. It was the start of the Cabernet harvest, and she was gearing up to begin harvesting the week the fire happened. The 2017 Cabernet harvest would have taken another three weeks. Instead, she is now in the process of estimating the losses.

The Losses come in many forms

Estimating the losses are hard because there are tangible things that were lost like bulldozed deer fences, melted irrigation systems, and burnt vines. But there are intangible items like all of the time, effort and TLC that was put into the vineyard for the 2017 vintage that won’t materialize and the 120-year-old vines that were blown over by the winds. How do you put a price tag on those things??

As we speak, the winemakers are determining what to do with the fruit. The fruit that was already harvested was not affected and will be used to blend going forward. However, the damage to the unharvested fruit ranged from heavy to light smoke damage, and it is up to the winemaker to determine how much blending is needed to make it into a drinkable wine that tells the story about the 2017 vintage and still meets the intended style of the wine. If the winemaker determines that they cannot use the grapes for their originally intended program, then their options are to sell the grapes, blend it down into a lower tier or put it into a whole new program. For example, if there aren’t enough grapes to make a Sonoma labeled wine, the useable grapes could be blended with grapes from other areas and designated a California wine. This allows the grapes to be used, but it lowers the value. Labels that were already printed for the 2017 Sonoma vintage now have to be scrapped, and new labels will need to be printed. This will be a challenge for the Supply Chain team to secure more printing time. Consider that this is not the only vineyard that will need to change what was planned for their grapes.

Also, any grapes that were hit by flame retardant, even though it was food grade, the Ag Commissioner for both Napa and Sonoma have deemed that fruit non-useable. A block of Malbec and some of her Cabernet were affected by this ruling. This means the 2017 Malbec from this vineyard is lost. The firefighters also bulldozed through a deer fence to dig a trench (an expense she initially forgot to account for). One of her neighbors stopped by as we were talking and said that trench probably saved his area. They plan to get together in 2018 for a BBQ at the vineyard.

Next, there are the vines. Some vines were exposed to high heat but will be able to recover and produce grapes again. The vineyard manager told me if only the bark is burned then the vines can recover. If it burned through then, those vines have to be removed. It will take at least three years for the new vines to produce grapes that can be used to make quality wine. She also lost many of her trees. The trees are for habitat and provide shade for workers and vehicles.

Typically she hosts 75 tour groups per year, and since the fires, all of her tours have been canceled. She hopes to resume tours in June 2018. This will give the vineyards and trees time to grow and the vineyard to begin to look normal again.

Next unknown is what Mother Nature has in store for us since we are at the start of the rainy season. So far we haven’t gotten much rain for December which is a temporary blessing because it gives everyone time to put erosion control measures into place. Erosion control is to protect the waterways and slopes because water doesn’t permeate anything that has ash sitting on it. This vineyard manager has been putting down wattle and straw to hold things in place in case of a rain event. This time of year, erosion control is a part of the annual viti cycle but the expense for this year is much higher than was originally planned.

Finally, she tells me that fire is a natural cleanse that brings about new native growth but it sucked the moisture out of the ground, so you do need the rain to come to replenish that lost moisture. A beneficial rain would be steady from March through June. The huge rain events that we had in 2016 and 2017 would be a huge challenge to deal with in 2018. Drought conditions would be good for her vineyard because that’s what her vines work best with, but the vineyards on the valley floor would suffer. She concludes with a smile that some rain would be good but not too much rain. That’s one thing that I love about the Wine Industry…friendly competition.

The annual viticulture cycle is about to kick off with the new year. In addition to doing all of the usual tasks for the vines that weren’t affected by the fire, this vineyard manager will be removing and replanting vines and trees that burned starting in April 2018.

It is going to take years for Napa and Sonoma Counties to completely rebuild and recover from the fires of 2017. In the interim, we can all support the vineyards of Napa and Sonoma by buying their wines to keep the cash flow going so they can rebuild and by visiting the vineyards that are still open, so they don’t suffer more economic losses beyond the fire event itself.

Karen Bird is a Senior Planning Analyst for Profit Point Inc. She has over 25 years of Engineering and Supply Chain Planning experience working in the Specialty Chemicals, Consumer Packaged Goods and Wine Industries.
View all posts by Karen Bird →

Have a Question? Get in touch. Profit Point is here to answer any questions you may have, help you with information, and create an effective solution for all of your supply chain needs.
END_OF_DOCUMENT_TOKEN_TO_BE_REPLACED